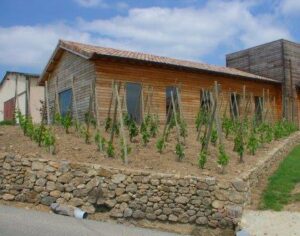 Learn everything about Domaine Pierre Gaillard Cote Rotie with wine tasting notes, wine and food pairing tips, best vintages, a history of the property and information on the vineyards and winemaking. If you want to read about other important wineries and wine makers from the Rhone valley: Links to all Rhone Valley Wine Producer Profiles

Domaine Pierre Gaillard, located in Malleva, is a relatively new producer in the Cote Rotie appellation. The domaine was founded in 1986 with only .25 hectares of vines. If you recall the parable, “Mighty oaks from little acorns grow,” this is clearly what has taken place with Domaine Pierre Gaillard.

Prior to founding his own estate, Pierre Gaillard was experienced in everything to do with Cote Rotie. In fact, Pierre Gaillard helped plant the first vines used in the famous wine of La Turque for Guigal.

Today, Domaine Pierre Gaillard owns 25 hectares vines in the Northern Rhone. However, he is in charge of 77 hectares of vines in total. The cellars are situated in the Malleval commune.

Much of their vineyards in Cote Rotie are located in the Cote Rozier lieu-dit, with its steep, granite and schist soils. They also own vines in the La Vialliere, Champet and Fongeant lieux-dits.

In Cote Rotie, the grapes are partially destemmed. The Syrah and Viognier are co-fermented. Malolactic fermentation takes place in barrel. All the work in the vineyards is 100 organic.

The wines are aged in 50-70% new, French oak barrels for between 18 to 20 months. The percentage of new oak and time for barrel aging depends on the cuvee and the character and quality of the vintage. Domaine Pierre Gaillard goes their own way as far as winemaking goes.

They use many modern techniques and they are also willing to experiment. For example, starting with the 2012 vintage they have been using small, clay amphora to vinify a small portion of their wines.

Domaine Pierre Gaillard Classique is a blend of 90% Syrah and 10% Viognier from vines planted in the Cote Blonde and Cote Brune with vineyards that face a south by southeast exposure. The grapes are almost always fully destemmed. Malolactic fermentation takes place in barrel. The wine is aged in 50% new, French oak barrels for an average of 18 months before bottling.

Domaine Pierre Gaillard Rose Pourpre made its debut with the 1995 vintage. The wine is made from 100% Syrah planted in the Cote Rozier vineyard, next to La Landonne. The vineyard is small, at about .8 hectares of vines. With a southern exposure, the grapes are almost always fully destemmed. Malolactic fermentation takes place in barrel.

The wine is a selection of the best barrels from the vineyard in each vintage. The decision as to which casks are going to be used for the Cuvee is not made until a month or so before bottling. The wine is aged in 50% new, French oak barrels for between 18 to 20 months before being bottled.

Domaine Pierre Gaillard Cote Rotie Esprit de Blonde is the estate’s most recent offering. The wine made its debut with the 2011 vintage. The wine is made from a blend of 95% Syrah and 5% Viognier from vines that are on average, more than 40 years of age. Although, the blend can vary slightly in select vintages.

As the name implies, the vineyard is located on the Cote Blonde. The grapes are 100% destemmed. Malolactic fermentation takes place in barrel. The wine is then aged in 100% new, French oak barrels for an average of 18 to 20 months before bottling.

The parcel of vines used to produce Pierre Gaillard Cote Rotie Esprit de Blonde is only .6 hectares, so as you would expect, the production is tiny, with about 175 cases of wine being produced in an average year.

Domaine Pierre Gaillard continues to change and update their portfolio of wines quite often. The following Pierre Gaillard Cote Rotie wines were produced at one point, but are no longer being made today; Brune et Blonde, Cote Rozier Reserve, Le Crete Reserve Blonde and La Vallieres.

It’s possible that some of the cuvees offered by North Berkeley Imports are unique and were only made available to the American market.

Domaine Pierre Gaillard, when young, should be decanted at least 1-3 hours, give or take, allowing the wines to soften and open their perfume. Older vintages might need very little decanting, just enough to remove the sediment.

Domaine Pierre Gaillard is usually better with 7-9 years of cellaring and should be at its best between 10-20 years of age.