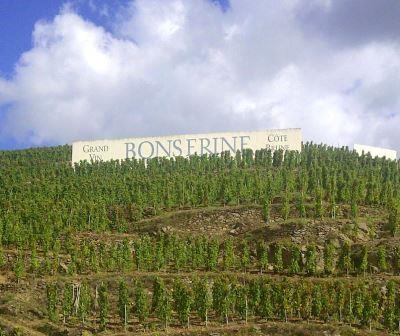 Learn everything about Domaine de Bonserine Cote Rotie with wine tasting notes, wine and food pairing tips, best vintages, a history of the property, information on the vineyards and winemaking. If you want to read about other important wineries and wine makers from the Rhone valley, Links to all Rhone Valley Wine Producer Profiles

Domaine de Bonserine does not have a long history in Cote Rotie. The Northern Rhone Valley estate was founded in 1972 by Alfred Gerin, along with an American partner/investor. In 1989, Alfred Gerin left the property to help found Jean Michel Gerin.

After Guigal took over Domaine de Bonserine, they made a serious financial commitment to update the winery, replant parts of the vineyard and produce the best wine possible.

They built a new, state of the art cellar with temperature controlled, stainless steel tanks. Much of the wine is now aged in 600 liter demi-muids, instead of smaller, standard 228 liter barrels.

Domaine de Bonserine owns 10.5 hectares of vines in Cote Rotie, making de Bonserine the second largest vineyard owner in the entire Cote Rotie appellation. The vines are planted in some of the best terroir in the appellation on both the Cote Blonde and Cote Brune.

With their 10.5 hectares, they are the second largest domaine in the appellation. The terroir is mostly steep hillsides with iron-rich schist and mica soils. All their work in the vineyard is done on a sustainable, farming basis. No chemicals, pesticides or herbicides of any type are ever used.

Domaine de Bonserine la Garde – From 100% Syrah from vines that range in age from 60 to 80 years of age planted on the Cote Brune, with just a touch of fruit from the Cote Blonde. For this Cuvee, they use .08 hectares of vines.

On average, between 2,000 and 2,500 cases are produced each year, making this one of the most widely available, high-quality wines from all of Cote Rotie.

Domaine de Bonserine la Vialliere – From a blend 95% that ranges from 95% to 97% Syrah and 3% to 5% Viognier. This single vineyard wine comes from vines planted entirely in the la Vialliere lieu-dit. They own 1 hectare of vines in the lieu-dit.

The vines were planted in 1995, so they are just now starting to come of age. The wine is made from grapes that are 95% destemmed. The wine is then aged for 24 months in 100% new, 640 liter demi-muids. The production is quite small as the average vintage produces about 350 cases of wine each year.

Domaine de Bonserine Cote Rotie is their young vine cuvee made for early drinking pleasure. The wine is not produced in every vintage. So far, it has only been produced in 2012, 2014 and 2016.

Domaine de Bonserine, when young, should be decanted at least 1-3 hours, give or take, allowing the wines to soften and open their perfume. Older vintages might need very little decanting, just enough to remove the sediment.

Domaine de Bonserine is usually better with 7-10 years of cellaring and should be at its best between 9-20 years of age.

Over the years, Domaine de Bonserine has produced at least 3 Cote Rotie wines that are no longer being made.