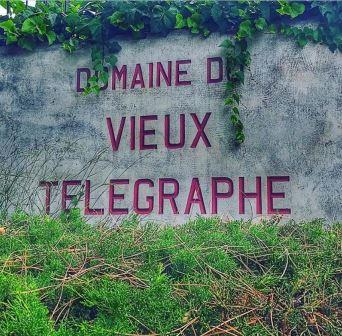 Learn everything about Domaine du Vieux Telegraphe, Chateauneuf du Pape with wine tasting notes, wine and food pairing tips, best vintages, a history of the property and information on the vineyards and winemaking. If you want to read about other important wineries and wine makers from the Rhone valley: Links to all Rhone Valley Wine Producer Profiles

Domaine du Vieux Telegraphe is one of the better known names in Chateauneuf du Pape. The Brunier family has been producing wines in the Southern Rhone Valley for over 100 years. Vieux Telegraphe was founded in 1898 by Hippolyte Brunier, the great, grandfather of the current owners.

At the time the estate was founded, only 1 hectare of vines was cultivated with grapes. The remaining land was used for growing fruit and vegetables, which in those days, made a lot more money than grapes used for wine.

They chose the name Vieux Telegraphe from an aging signal tower built in 1792 by Claude Chappe. Chappe is the inventor of the optical telegraphe, so as you can see, Vieux Telegraphe is a very fitting name. The first vintage to be produced and bottled at Vieux Telegraphe was the 1900. 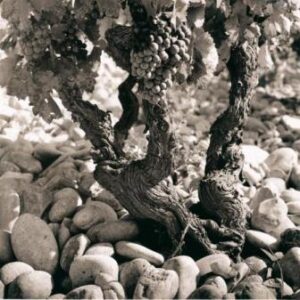 The best parts of the Vieux Telegraphe vineyards are situated in the La Crau sector, with its terroir of very, rocky soils with small pebbles, stones, red clay and sand. In fact, the surface of the vineyard is made from pure rocks and stones. It’s amazing to see!

The vineyard is one of the largest with contiguous parcels in the La Crau lieu-dit. Vieux Telegraphe is usually a blend of 65% Grenache, 15% Mourvedre, 10% Cinsault and 10% Syrah. Although the blend can vary, depending on the character of the vintage.

The production of Vieux Telegraphe remains traditional. The grapes are destemmed in the majority of cases, which comes out to being close to 60% or more of the harvest most of the time. One consideration they are concerned with is, if destemming could break the skins.

If the skins are fragile, that impacts the amount of destemming they would perform that vintage. The grapes are hand harvested and moved by gravity flow into the vatting room for fermentation where the young and old vines are separated and placed into short, 100 hectoliter, oak tanks for maceration and fermentation.

While fruit younger than 25 years is fermented separately from older vines, all the varietals are fermented in the same vats. Next, the wine is moved into concrete vats for 9 months before their being aged in 70 hectoliter foudres.

The production of Vieux Telegraphe is one of the largest in the entire Chateauneuf du Pape appellation producing more than 16,000 cases of wine per year

Le Telegramme is a blend of 90% Grenache with 10% Mourvedre. Le Telegramme is made predominantly from the estate’s youngest vines, which are on average close to 40 years of age. The wine is aged in vat and foudres for 15 months before bottling. Prior to the 2002 vintage, Le Telegramme was named Vieux Mas de Papes.

Domaine du Vieux Telegraphe Blanc is made from a blend of 40% Clairette, 30% Grenache Blanc, 15% Roussanne and 15% Bourboulenc. The wine is aged in a combination of foudres, demi muids and new, French oak barrels for 9 months. The production is close to 2,000 cases per year. 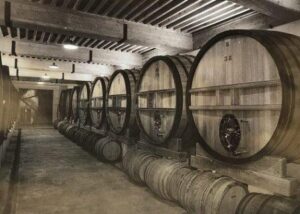 Domaine du Vieux Telegraphe Le Telegramme Blanc is produced for the American market. The wine is a blend of 40% Roussanne, 30% Grenache Blanc, 20% Bourboulenc and 10% Picpoul. The wine is aged in tank for 7 months. The production is limited to about 350 cases per year.

Domaine du Vieux Telegraphe is a wine that shows truly better wine age. Young vintages can be decanted for about 1-3 hours, give or take. This allows the wine to soften and open its perfume. Older vintages might need very little decanting, just enough to remove the sediment.

Domaine du Vieux Telegraphe is usually better with 4-6 years of bottle age. Of course that can vary slightly, depending on the vintage. In the best vintages the wine should be consumed within 8-25 years after the vintage.

The Brunier family also own another vineyard in the Chateauneuf du Pape appellation, la Roquete, which produces “Piedlong”. In addition, Domaine Vieux Telegraphe has vines in the Gigondas appellation where they own Domaine les Pallieres in a partnership with Kermit Lynch, the well-known American importer.

Les Pallieres makes 2 wines, les Racines, which comes from their oldest vines and Terraces de Diable, which is produced from vines located on the limestone terraces in the appellation.

Their Le Vieux Telegraphe Pigeoulet de Brunier is a Vin de Pays that comes from unclassified vines in the Vaucluse appellation and is made with both red wine grapes and white wine grape varieties. In the Cotes du Ventoux they produce Vieux Telegraphe Megaphone.

The industrious Brunier family also makes wine in the Bekaa Valley of Lebanon with Massaya.