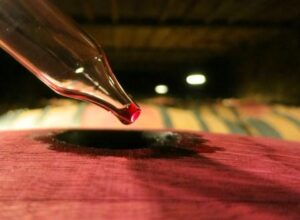 Learn everything about Louis Bernard Chateauneuf du Pape with wine tasting notes, wine and food pairing tips, best vintages, a history of the property, information on the vineyards and winemaking. If you want to read about other important wineries and wine makers from the Rhone Valley: Links to all Rhone Valley Wine Producer Profiles

The vineyards of Louis Bernard have an extensive history dating back to the late 1600’s, when the property was founded by Maruis Puget.

The modern era is of course, much more recent. You can view it as beginning in 1961, with the founding of the Boisset company by Jean-Claude Boisset. Or, perhaps in 1976, when Les Domaines Bernard was created. The name was later shortened to Michel Bernard.

The name changed again in 1996 to Louis Bernard. A partnership between the Puget family and Maison Louis Bernard was formed. Two years later, in 1998 Louis Bernard was purchased by the Boisset company and the wine became part of the ever expanding Boisset Collection. In 2003, they opened a massive tasting room Chartreuse de Bonpas, where customers can taste and buy wine.

Aside from their extensive interests in Chateauneuf du Pape, they also produce and sell a myriad of red and white wines from Gigondas, Vacqueyras, Cotes du Rhone, Cotes du Luberon, Lirac and the Cotes du Ventoux appellations in the Southern Rhone.

In the Northern Rhone Valley, they also work with growers in Crozes Hermitage, Cornas, St. Peray, St. Joseph, Cote Rotie and Hermitage. They also produce wine in Burgundy and in Napa Valley.

Louis Bernard owns 24 hectares of vines in the Chateauneuf du Pape appellation. Much of those vines are well placed in the La Crau lieu-dit.

Louis Bernard Chateauneuf du Pape is a blend of 80% Grenache, 15% Syrah and 5% Mourvedre. The Grenache vines are on average more than 40 years of age, The grapes are completely destemmed. The wine is aged in used, French oak barrels for close to 10 months. On average, close to 7,000 cases of wine are produced each year.

Louis Bernard Reserve is made from 70% Grenache, 20% Syrah and 10% Mourvedre. The grapes are 100% destemmed. The wines are aged in mostly used, along with a percentage of new, French oak barrels for 14 months. The production is about 800 cases per year.

Louis Bernard La Crau des Papes is a blend of 60% Grenache, 30% Syrah and 10% Mourvedre. The vines are planted in the rock and stone soils in the La Crau vineyards. The grapes are 100% destemmed. Vinification takes place in stainless steel tanks. The wine is aged in used, French oak barrels.

Louis Bernard Chateauneuf du Pape Blanc is made from a blend of 70% Grenache Blanc and 30% Clairette. The wine is aged from 6 months in a combination of stainless steel tanks and new, French oak barrels. The production is about 500 cases per year.

Louis Bernard can be enjoyed on the young side. Young vintages can be popped and poured, or decanted for about 1 hour, give or take. This allows the wine to soften and open its perfume. Older vintages might need very little decanting, just enough to remove the sediment.

Louis Bernard is usually better with 2-4 years of bottle age. Of course that can vary slightly, depending on the vintage. In the best vintages the wine should be consumed within 3-12 years after the vintage.

The white wine of Louis Bernard is best served with a myriad of different seafood dishes, shellfish, crab, lobster, sushi, sashimi, chicken, pork and veal, as well as Asian cuisine.