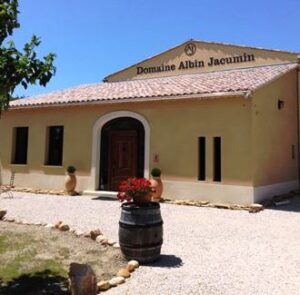 Learn everything about Domaine Albin Jacumin Chateauneuf du Pape, Rhone wine with wine tasting notes, wine and food pairing tips, best vintages, wine ratings, a history of the property, information on the vineyards, and winemaking. If you want to read about other important wineries and winemakers from the Rhone valley: Links to all Rhone Valley Wine Producer Profiles

Domaine Albin Jacumin is another recent success story in the Chateauneuf du Pape appellation. Although, the Jacumin family has been involved in making wine in the Southern Rhone Valley for almost 120 years.

Domaine Albin Jacumin was founded in 1991. The creation of the Domaine and its vineyard came about with the vines owned by the Jacumin family were merged together. The first vintage for the estate was in 1995.

The original name for the Domaine was La Begude des Papes. But because the Jacumin family also owned vines in the Cotes du Rhone and marketed the wines using the same, there was some confusion in the marketplace, due to the term “des Papes” in the name.

The family also owns 6 hectares of vines in the Cotes du Rhone appellation where they produce their Domaine Albin Jacumin Les Bedines. A percentage of their harvest is still sold to negociants in the Rhone Valley.

Their vines are seem widely dispersed, but most of their vines are located in the north of the Chateauneuf du Pape appellation in several different vineyards, Bois Dauphin, Brusquieres, Cansaud, Colombis, Galliguieres, Marines, Moulin a Vent, Pied de Baud, Serres, Terres Blanches and Tresquois.

They have as you might expect with such widely dispersed vineyards, a mix of terroirs that are mostly rocks, stones, sand, clay, and limestone soils.

Domaine Albin Jacumin La Begude des Papes is produced from a blend of that ranges from 70% Grenache, 15% Mourvedre, and 12% Syrah, and 3% Cinsault. The Grenache vines are more than 50 years of age. The terroir is rocks, stone, sand, and limestone soil.

The vines are planted in the les Brusquieres lieu-dit. The grapes are destemmed. Vinification takes place in cement vats. The wine is aged in a combination of vats along with used, French oak barrels and demi-muids before bottling. The production is on average 2,500 cases per year.

Domaine Albin Jacumin Aime is only produced in the best vintages. So far, the wine has only been made 3 times in 2010, 2012, and 2015. The wine is made from a blend of mostly old vine Grenache and various portions of all the remaining 12 allowable grape varietals.

The Grenache vines are at least 80 years of age. The vineyards are located close to the village of Chateauneuf du Pape in a terroir of mostly clay and sand soil. The vines are planted in the Les Marines vineyard. The grapes are fully destemmed. Vinification takes place in cement vats. The wine is aged in 100% used French oak barrels for 24 months.

Not much wine is produced. In fact, the entire production was only 25 cases in 2010 and it doubled to a whopping 48 cases in 2012! Part of the reason for the low production is the incredibly small yields from this parcel of vines. The yields are on average only 9 hectoliters per hectare.

Domaine Albin Jacumin My Grenache made its debut with the 2018 vintage. The wine, as the name implies is made from 100% Grenache. The grapes are fully destemmed and the wine is aged completely in amphorae.

Domaine Albin Jacumin Chateauneuf du Pape Blanc is made from a blend of 60% Clairette, 35% Grenache Blanc and 5% Bourboulenc. The wine is vinified and aged in stainless steel tanks. Not much of this wine is made. On average, close to 100 cases are produced in any vintage.

Domaine Albin Jacumin can be enjoyed on the young side. Young vintages can be popped and poured, or decanted for an hour so. This allows the wine to soften and open its perfume. Older vintages might need very little decanting, just enough to remove the sediment.

Albin Jacumin is usually better with 2-5 years of bottle age. Of course, that can vary slightly, depending on the vintage. In the best vintages, the wine should be consumed within 8-12 years after the vintage.