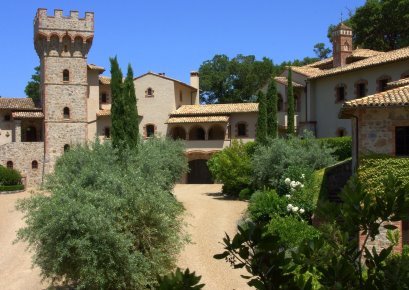 Blankiet Estate was founded in 1996 by Claude Blankiet and Katherine Blankiet. Claude Blankiet spent his youth in Burgundy. He moved to New York and enjoyed a successful career in the textile industry before becoming a winery owner. In 1996, they purchased from Domaine Chandon, the Paradise Hills vineyard, situated not far from Yountville on the western foothills of the Mayacamas Mountains. One of their closest neighbors is Dominus.

It might seem obvious that Claude Blankiet enjoys his French roots because he also brought in Michel Rolland as their consultant. The first wine they produced was their 1998 Cabernet Sauvignon, which was not sold commercially, as very little wine was made. 1999 was the first commercially available release. The wine was greeted enthusiastically by the public and the trade. However, within a year or two, Blankiet instituted a hostage wine program, forcing consumers to buy their Cabernet Sauvignon and Merlot as a package. Consumers did not like that and for several years, the wine fell from favor. Today, the quality has continued to improve and the wines began selling better once the forced packaging of the wines was discontinued.

Blankiet Estate, with its 16 acres of vines has soils of rocks, stones, volcanic ash and clay was planted to Bordeaux varietals, Cabernet Sauvignon, Cabernet Franc, Merlot and Petit Verdot. Only organic farming techniques are employed at Blankiet Estate.

Blankiet Estate, their flagship wine is produced from a blend of Cabernet Sauvignon, Merlot, Cabernet Franc and Petit Verdot. The wine is aged in 100% new, French oak barrels for between 18 to 22 months before bottling. On average, the production is close to 600 cases per vintage.

Blankiet Estate Rive Droite is a blend of Merlot and Cabernet Franc. The wine is aged in 100% new, French oak barrels for between 18 to 22 months before bottling. On average, the production is close to 300 cases per vintage.

Blankiet Estate Mythicus Red is made from 100% Cabernet Sauvignon and is a selection from their best lots. The wine is aged in 100% new, French oak barrels for between 18 to 22 months before bottling. On average, the production is close to 150 cases per vintage.

Blankiet Estate Prince of Heart is the second wine produced from lots deemed not at the level of their other releases. The wine is usually dominated by Cabernet Sauvignon grapes. The wine is aged in 70% new, French oak barrels for between 18 to 22 months before bottling. On average, the production is close to 750 cases per vintage.

Blankiet Estate wines are best served at 15.5 degrees Celsius, 60 degrees Fahrenheit. The cool, almost cellar temperature gives the wine more freshness and lift. Young vintages of their red wine can be decanted for 1-3 hours, depending on the character of the vintage. This allows the wine to soften and open its perfume. Older vintages might need very little decanting, just enough to remove the sediment.

For a short period of time, in their formative years, Blankiet Estate produced a wine from 100% Merlot. That wine is no longer being made. The majority of wine from Blankiet Estate is sold via a private mailing list.