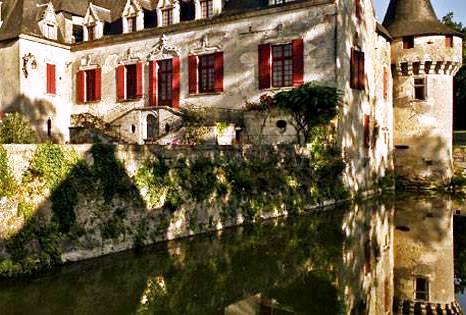 Learn everything about Chateau Olivier Pessac Leognan, with wine tasting notes and wine with food pairing tips. Learn the best vintages, the history of the property, and information on the vineyards and winemaking. If you want to read about other important, Bordeaux Chateaux: Links to all Bordeaux Wine Producer Profiles

Chateau Olivier is in contention for one of the oldest properties in Bordeaux. Bordeaux wine historians believe the estate dates back as far as the 11th century. Some ancient remnants of the original buildings can be seen close to the east pavilion on the lower portions of the property.

The next era for Chateau Olivier came into being as many of the top Bordeaux chateaus, through marriage and a dowry. In 1663, Pierre Penel, the Baron of La Brede married Marie de Lasserre. She was the daughter of the lord of Olivier. Her dowry was the vineyard that we know of today as Chateau Olivier.

In 1882, there was a catastrophic fire and Chateau Olivier needed to be rebuilt. The new owners chose a Troubadour style, which was unique for not only Graves but in Bordeaux as well. In 1867, Chateau Olivier was purchased by the mayor of Bordeaux, Alexandre de Bethmann. The de Bethmann family, which has their ancestral roots in Germany, own a very large banking operation, Bethmann Bank.

Chateau Olivier was not the family’s first foray into owning a Bordeaux vineyard, at one point in time, they also owned Chateau Gruaud Larose in St. Julien. Chateau Olivier continues to remain in the hands of the de Bethmann family today.

Almost a century later, Chateau Olivier was officially listed as one of Gironde’s Sites Pittoresques and became a protected structure. In 1953, the chateau, its outbuildings, moat, and fountains, were all classified as historic monuments.

For a period of time, the negociant firm of Eschenhauer managed the winemaking and sales, under a lease agreement that was terminated in 1981. Jean-Jacques de Bethmann managed Chateau Olivier until July 2012, when he passes away. He was ably succeeded by his son, American-born and educated, Alexandre de Bethmann, who has overseen a noticeable increase in quality, especially in their white wines.

Chateau Olivier is quite large at 220 hectares. However, it is important to note that only 60 hectares are under vine. For the red wine, 52 hectares are planted to 58% Merlot, 40% Cabernet Sauvignon and 2% Petit Verdot. Previously there was 10% Cabernet Franc planted. Today, all those Cabernet Franc vines have been removed.

Overall, this shows a marked increase in Merlot in the vineyard since the 1990s. Previously, Cabernet Sauvignon occupied close to 70% of the grapes planted for red wine. So as you can see, over the past several years, the makeup of the vineyard has gone through massive changes.

It’s also important to note that Chateau Olivier planted 8 new hectares of vines that were previously were used for forest land.

For the white Bordeaux wine of Chateau Olivier, 8 hectares of vines are planted to 78% Sauvignon Blanc, 20% Semillon, and 2% Muscadelle. Interestingly, while vineyards planted for red wine grapes are often changing their plantings over the years, most vineyards with white wine grapes, seem to stay the same.

That is not the case, as the amount of Semillon has been decreased by 10%, while the Sauvignon Blanc has been increased by 10%, since the mid-1990s. Those vines are old with an average of 40 years of age.

The terroir of Chateau Olivier is gravel with clay and limestone in the topsoil, which is common to the Pessac Leognan appellation. Underneath that, you find more gravel, sandstone, rocks, sand, and limestone. The red wine grapes are planted in gravelly, sandy soils. Most of the white wine grapes are planted in the cooler, limestone, and clay terroir. They have hillsides that rise to 55 meters in elevation.

The vines for both red and white wine are planted to a vine density that varies from 8,000 to 10,000 vines per hectare. Extensive replanting has been taking place in the vineyards, so the younger vines are now planted to the higher levels of vine density.

On average, the vines are close to 25 years of age. The vines are planted to a vine density that ranges from 8,000 to 10,000 vines per hectare. Newer plantings are being done at higher levels of density.

As you read earlier, only a relatively small portion of the vineyard is cultivated with vines here. At Chateau Olivier, 160 hectares are unplanted and instead remain devoted to trees, verdant forests, parks, and grazing land.

For the production of the red wine of Chateau Olivier, the wines are vinified in temperature-controlled, stainless steel vats. Malolactic fermentation takes place in the tank. The wines of Chateau Olivier are aged in an average of 30% new French oak barrels for between 12 and 14 months.

To produce the white wine of Chateau Olivier, 33% of the berries are allowed skin contact before fermentation. Vinification begins in tanks and is finished in French oak barrels. The wine is aged on its lees for 9 months before bottling.

Chateau Olivier can be enjoyed on the young side with decanting. Young vintages can be decanted for an average of 1 to 90 minutes, give or take. This allows the wine to soften and open its perfume. Older vintages might need very little decanting, just enough to remove the sediment.

Chateau Olivier is usually better with at least 5-7 years of bottle age. Of course, that can vary slightly, depending on the vintage character. Chateau Olivier offers its best drinking and should reach peak maturity between 9-16 years of age after the vintage.

Chateau Olivier is a perfect match with Asian dishes, hearty fish courses like tuna, salmon, mushrooms, and pasta as well as cheese.

The white wine of Chateau Olivier is a perfect wine to serve with shellfish, sashimi, sushi, all types of seafood, chicken, veal, and cheese.