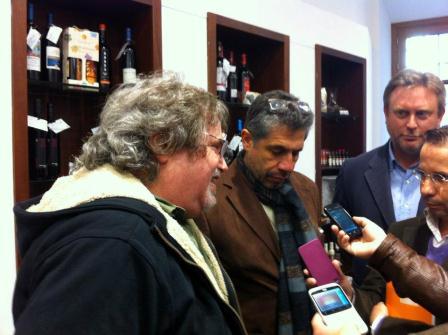 David Schildknecht will review Oregon and Washington. Neal Martin will move into covering Spain and South America. Neal Martin is a good taster and gifted writer. However, based on his low ratings for some styles of Bordeaux wine, for example, Chateau Pavie and 2009 Chateau Cos d’Estournel, it will be interesting to read his comments and scores for regions known for producing richer, high alcohol styles of wine. My guess is, you will not see many triple digit scores from Spain, or the type of high scores awarded by Miller to many of the wines from Argentina.

“Some may believe my stepping down is in response to my critics. Nothing could be further from the truth. I have felt constrained in responding while still on The Wine Advocate staff. While the office has defended my actions, justifiably, now it is time for me to speak for myself. In what format I will do that remains to be seen. This much is clear. I am returning to Bin 604 Wine Sellers in Baltimore on a part-time basis. I also plan to explore consulting opportunities. However, what really excites me is the opportunity to spend more time in Spain as well as South America researching a book, probably a primer on their wines, which will mean doing more traveling and tasting than I have done up to now. I may well do a blog on wines from Spanish speaking countries (including Chile and Argentina), and apply any additional spare time I may have to studying Spanish. I leave The Wine Advocate with a clear conscience. I have never accepted (or requested) fees for visiting wine regions or wineries. I have enjoyed being part of The Wine Advocate, and I start this new venture with great expectations. I am enormously thankful for the support and friendships I have enjoyed over these years”.

Miller’s time with Parker has been filled with problems.  What most people do not realize is, anyone working as a wine critic, especially for Robert Parker is going to take some heat. But Miller took more than heat. He was also in hot water, far too often.

Early on, Miller was accused of taking advantage of his position as reviewer for the Wine Advocate. This first took place in 2009 following a dinner at Berns steakhouse in Tampa with the well-known Spanish importers, Eric Solomon, Patrick Mata, and Jose Pastor. Next, it was discovered Miller went on a trip to taste wines in Argentina that was paid for by the promotional firm, “Wines of Argentina”. In the same year, Miller was also hosted by the promotional firm “Wine Australia” that paid for his travel, hotel accommodations and meals. This was in direct violation of Robert Parker’s policy for journalistic independence. Those events were preceded by the discovery that Miller had enjoyed vacations in Australia’s Murray River with Dan Philips, a U.S. importer of Australian wines.  The Australian conflict of issues sparked heated debate on numerous Internet Wine chat sites, including Parker’s own board which tarnished Parker’s image to some consumners.  To avoid further embarrassing complications, the duties of writing about the wines of Australia was awarded to Lisa Perrotti Brown.  Miller’s name is once again associated with controversy over a possible pay for play scandal in Spain. The full details of that issue continue to unfold.

Does this mean Miller’s views were tainted? No. Junkets, paid speaking engagements and dinners with people in the industry are common practice by most, if not every wine writer.  The problems came because it offered Robert Parker’s critics the opportunity to question Miller’s ethics and perforce, Parker’s ethics. Prior to Miller, while you could argue the merits of Parker’s taste in wine, he built an unassailable reputation for ethics that took decades to create. Parker was the only 100% pure wine critic in the industry who accepted no ads or favors of any type. This allowed Bob the enviable position of true, journalistic independence. This pristine image was tainted by Miller.