A few days ago I attended a barrel-tasting of the upcoming vintage 2010 by the prestigious estate Robert Weil from the region Rheingau. The tasting clearly proved what I heared from several German winemakers in the last weeks and months that the German vintage 2010 is a dream vintage for sweet Riesling. BUT the quantity is very low.

.
The 2010 sweet German Rieslings showed a remarkable flavor density with a visible ripe acidity but good integrated. In addition finesse and huge minerality. No doubt, the vintage 2010 was a real challenge for the german winemakers but it seems that the few TOP winemakers produced some stunning Rieslings. But again, be fast buying these wines, when they arrive in late summer or autumn.

“The estate Robert Weil in the region Rheingau was founded in 1875. The Rheingau is a unique, self-contained region on the Rhine where the man-made landscape and the vine are at one. Its long viticultural tradition was established by monasteries and large aristocratic wine estates. Despite its demands on soil and climate, the Riesling grape thrives here and is inextricably linked with the Rheingau and its viticulture. Weingut Robert Weil, one of the region’s younger estates, is located in the heart of Kiedrich, a village first documented in 950. Its profile is marked by the artworks and architecture of the Gothic parish church St. Valentine, aristocratic Gothic, Renaissance manors, and the tower of Scharfenstein castle, a former residence of the electors and archbishops of Mainz.The estate cultivates 75 ha (185 acres) of vineyards planted with Riesling (99 %) and Pinot Noir (1 %) grapes. Wilhelm Weil, the great-grandson of the estate’s founder, carries on the tradition of uncompromising, quality-oriented practices in the vineyards and in the cellars. The historical manor house, the ultra-modern cellars and the vinothek stand side by side in a beautiful park – the same synthesis of old and new that is reflected in the estate’s philosophy of winemaking.” 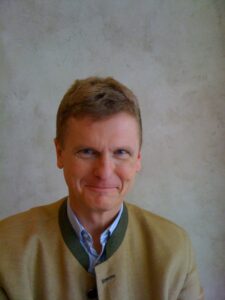 Winemaker Wilhelm Weil – “In 1788, Thomas Jefferson made the first ranking of the Rheingau’s vineyard sites, and in 1814, Johann Wolfgang von Goethe noted in his Rheingau diary: “The quality of a wine depends upon the vineyard site.” Johann Philipp Bronner and Wilhelm Hamm published their “ranking of Rheingau wines and sites per se” in 1836 and 1865, respectively.   By the late 19th century and in the early 20th century, when Rhine Rieslings were highly esteemed, the Gräfenberg Rieslings of the Dr. Robert Weil estate were enjoyed in the courts of European emperors and kings as “grands crus of German origin” as well as by Europe’s upper middle classes in distinguished hotels throughout Europe, from St. Petersburg to Prague, Vienna, Berlin, Paris and London.
Vineyards&Cellar

Although the Rheingau is one of Germany’s smaller wine-growing regions, its 3,100 ha (7,660 acres) of vineyards are vastly diverse in their geological makeup. They can be divided into three zones: vineyards in proximity to the Rhine, vineyards on the higher reaches of the middle plateau, and vineyards on the heights at the foothills of the Taunus Hills. Among these highlying sites (up to 240 m/780 ft in altitude) surrounding Kiedrich lie the three steep hillside sites of Weingut Robert Weil: Kiedricher Klosterberg, Kiedricher Turmberg and Kiedricher Gräfenberg. The microclimate of these three southwest-facing sites is excellent, with perfect exposure to the sun and correspondingly high temperatures as well as good circulation from the Taunus winds drawn into the Rhine Valley.

Furthermore, the vines are able to permeate the stony soils and develop deep roots, while the water-retaining soil layers ensure the vines a good water supply. Inclination (up to 60 %), exposure (southwest) and the ability of the barren stony soils to absorb heat are the factors that make for three perfect Riesling sites. These conditions, as well as ideal circulation, enable the grapes to remain on the vine for a long time, ripening well into November. Wines made from the loose clusters of small, intensely flavored berries are picture-perfect Riesling wines with a fine acidity and distinctive mineral tone. At the same time, they are marked by elegance and finesse.

Estate Robert Weil has the same high standards for operations in the vineyard and in the cellar. The most modern technical know-how is combined with proven methods of traditional winemaking to preserve and fully realize the potential of what nature provides.

Harvested grapes are handled as gently as possible, starting with their journey from the vineyards to the cellars. Natural sedimentation is used to fine the must, after which oenologists decide whether the juice is best processed in stainless steel tanks or traditional oak casks. Fermentation is temperature controlled, strictly monitored, and lasts from six to twelve weeks. If natural sweetness is to be retained, fermentation is interrupted through temperature reduction. This results in a very fine residual sweetness derived from fructose.

Further vinification takes place in stainless steel tanks of varying sizes (depending on the size of an individual lot) and in traditional mature oak casks (“Rheingauer Stückfass”: 1,200 liters). Yeast contact and stirring (bâtonnage) is also used. After a slow fermentation and aging, the wines are sterile filtered and bottled as gentle as possible in order to retain the wonderful primary grape aromas and for additional aging in the bottle. 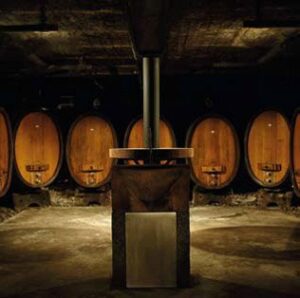 Casks cellar (traditional Rheingau-casks »Stückfass«) ©Robert Weil Estate
The character of Robert Weil Riesling wines is marked by the mineral-rich slate soils. They are elegant, complex wines with a pronounced fruityness and many nuances in flavor and bouquet. Vinified in lively dry and full-bodied dry or sweeter styles, they are excellent partners with food or delightful on their own. The wines embody a perfect interplay of fine, but firm, acidity with natural sweetness and extract.
The Robert Weil portfolio ranges from “Gutswein” and “Ortswein” (basic quality wines bottled under the Weil estate label) to the Rieslings from an “Erste Lage” (top site), such as Kiedricher Klosterberg and Kiedricher Turmberg, and “Grosse Lage” (finest top site), such as Kiedricher Gräfenberg. This distinction marks a return to the practice of a century ago when only the finest wines bore the name of a specific vineyard site; all others were sold under village or domain names. The estate guarantees the quality of both, but wines labelled with an individual vineyard name also have unique, site-specific qualities. “
Vintage Report 2010
“After a looong and cold winter with more snowy days than usual there was a late bud burst on 26th april. May was too cold and rainy, as a result the blossoming started late on 16th june. June was also not such good, so there was a huge poor fruit set which resulted in a dramatic yield losses.
The 21th of August marked the start of the ripening phase of development. Then a rainy september which frustrated the german winemakers, but thankfully on 3rd october the indian summer was coming.  We were positively surprised by the flavor density of the grapes which was based on low harvest crop and the grapes were long at the vines. The wines show a remarkable density in the flavors with a visible ripe acditity (good integrated) and a long finish.
The 2010 wines show some simalarity to the vintage 1990 and 2001, but 2010 has a higher ripeness”   Wilhelm Weil
2010 Estate Rheingau Riesling trocken
well made

BRAVO……fascinating fruit density for an estate Riesling. Good balance, ripe acidity and a great inner density in the finish. BUY

power with fine density of flavors and minerality 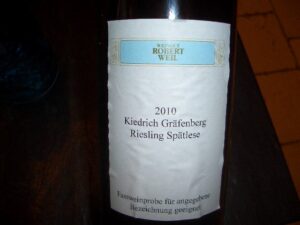 Simply to die for!  Deep, deep fruit and what a length. BUY

2010 Gräfenberg TBA
nectar of the gods

So, be fast in buying these magic sweet Rieslings from the estate Robert Weil when they arrive in late summer or autumn.