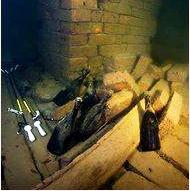 Finnish diver, Christian Ekstrom, discovered some of the world’s oldest Champagne bottles in a ship wreck. The bottles date from about 1830.  This is not the first champagne found in ancient shipwrecks.  Previously, several bottles of 1907 Heidsieck Gout Americain was discovered in the  Baltic Ocean. However, this current find is the oldest champagne that has been recovered from a shipwreck.

It is thought that the champagne was being shipped to St. Petersburg for Czar Alexander II.

After almost two centuries underwater, all traces of any labels had been washed away. But when the wines were uncorked, cork listed the wine as a Juglar, a Champagne shipper that ceased to exist after 1830. The shipper changed names to Jacquesson after 1830. Champagne was not the only alcoholic discovery in the shipwreck. The find included 4 bottles of beer as well. In all, a total of 168 intact Champagne bottles were discovered.  The cold temperatures, coupled with ample pressure on the corks seems to have offered the wines perfect cellaring conditions.

At another recorking, François Hautekeur from Veuve Clicquot discovered the name Werle was branded on the cork. Werle is Edouard Werle who obtained most of the champagne house in 1830 from the famous Widow Clicquot, who inherited the company from her husband in 1805. This makes those bottles younger than 1830, according to Hautekeur.

On the other hand, the representatives from Jacquesson, the company that purchased Juglar insisted that due to the bottle shape, and the companies former name being on the corks place the wine older than 1830. While one of the oldest champagnes in existence, this is not the oldest.  Perrier-Jouët claims bottles from their 1825 vintage deserve that honor.

Richard Juhlin, the world’s authority on champagne with several books to his credit was quoted as saying “The bottles could fetch as much as $70,000 each at auction!”

The photo was originally published in the New York Times.