1961 Bordeaux Wine Vintage Summary with harvest information, vintage characteristics, buying tips and links. If you are seeking more in-depth information on anything and everything related to the Bordeaux wine region please see the: All About Bordeaux Wine Guide
.
1961 Bordeaux wine is one the legendary Bordeaux vintages of all time and for several good reasons. Of course, that all starts with the perfect growing season and harvest. The spring frost conditions naturally reduced crops, lowered yields and concentrated the already intense flavors.

Generally speaking, the spring was mild in Bordeaux, which led to an early and even flowering. A frost struck much of Bordeaux at the end of May, which damaged many of the vines.

Because the frost occurred late in the season, after the flowering, there was no additional birth of new berries. The crop was already low, due to the frost of 1956, this only reduced the yields further, with several the top estates reporting yields of 11 hectoliters per hectare. From that point forward, everything improved.

The summer was for the most part, warm, sunny and dry. The only break from the excellent summer weather occurred in July, when the summer rain fell, which proved to exactly what the grapes needed. The remainder of July was warm, sunny and dry. August was extremely hot and dry, which was followed by a close to perfect September, which was warm and dry.

These conditions produced small, ripe, sweet, ripe, thick skinned berries with almost unseen levels of concentration of intensity and flavor. The 1961 Bordeaux harvest officially began September 22. This is similar to what happened in 1945. Although, in 1945, the harvest started even earlier. Due to the naturally low yields in both years, the vintages are often compared with each other.

While 1945 Bordeaux favored the Medoc, that is not the case with 1961 Bordeaux wine.  Stunning 1961 Bordeaux wine was produced in Pessac Leognan, Pomerol, Pauillac, St. Julien and while Margaux was not consistent, Chateau Palmer made what people feel remains the best wine in their history! Chateau Latour is prodigious.

It was not a good vintage for St. Emilion, or the sweet, white, Bordeaux wine from Sauternes. Pomerol was particularly successful. 1961 Haut Brion is one a contender for the best wines they produced in the 20th century and La Mission Haut Brion is not far behind! 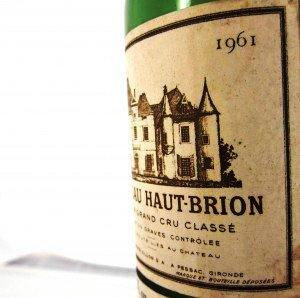 The small harvest produced great 1961 Bordeaux wine from in appellation from top to bottom. The wines were rich and tannic, which demanded extended cellaring. 1961 Bordeaux was not fun to drink in its youth.

In part, that explains why so many 1961 Bordeaux wines remain for sale today. The best wines are concentrated, deep, complex and hauntingly perfumed. One of the most important traits all great vintages share, is that the wines from top to bottom, and in all appellations produce great wine.

The following list of Bordeaux wines represent the wines offering a high ratio of price and quality for the vintage: 1961 Best Bordeaux wine for the money today