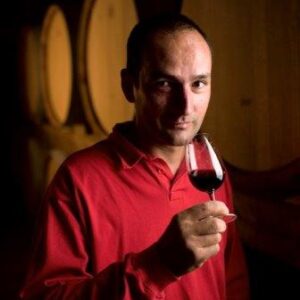 Learn everything about Yann Chave, Hermitage with wine tasting notes, wine and food pairing tips, best vintages, a history of the property and information on the vineyards and winemaking. If you want to read about other important wineries and wine makers from the Rhone valley: Links to all Rhone Valley Wine Producer Profiles

Yann Chave is not a domaine with a long history in Hermitage. It was created quite recently as it was founded in 1970 by Nicole and Bernard Chave after they made their first vineyard purchase of 4 hectares of vines, close to the village of Mercurol.

At the time, only 1 hectare was planted with vines. The remainder of the land was being used for fruit trees. By 1972, they saved enough money to begin planting vines on their other 3 hectares of vineyard land. And no, Yann Chave is not related to the famous JL Chave.

At first, they sold their grapes to negociants and the Tain l’Hermitage cooperative. In 1983, they broke ground and slowly began building their own winery and cellars.

The first vintage for Yann Chave where they produced, bottled and sold their own wine was made from the 1996 vintage. The domaine was named after the son of Bernard Chave, Yann Chave.

From that point forward, they continued adding vines to their holdings and today, they own 17 hectares of vines in the Northern Rhone. The vines are dispersed into two appellations.

In 2003, they finish construction on a brand new, modernized cellar. Yann Chave is now entirely owned and managed by Yann Chave who took over from his father Bernard Chave.

The actual Northern Rhone domaine is located in the middle of Crozes Hermitage. In total, they have 19.24 hectares of vines for the production of red wine and .76 hectares for white wine

Yann Chave Hermitage comes from vines planted in the lieux-dits of Beaumes and Peleat. 80% of the vines are planted in Beaumes, which is next to Le Meal.

The vines are still young, but they are aging, as they are on average 30 years of age. Yann Chave Hermitage is vinified in stainless steel vats.

The Hermitage wine of Yann Chave is then aged in neutral 600 liter barrels for an average of 17 months before bottling. The average annual production is close to 550 cases per year.

Yann Chave produces 3 wines from vines they own in Crozes Hermitage.

The red wine of Yann Chave from Crozes Hermitage is produced in much of the same method as they use in Hermitage, but with less aging and vatting time.

The white wine of Yann Chave is usually a blend of 70% Marsanne and 30% Roussanne and is aged in neutral tanks.

Yann Chave, when young, should be decanted at least 1-2 hours, give or take, allowing the wines to soften and open their perfume. Older vintages might need very little decanting, just enough to remove the sediment.

Yann Chave is usually better with 7-9 years of cellaring and should be at its best between 10-20 years of age.

The white wine of Yann Chave is best served with a myriad of different seafood dishes, shellfish, crab, lobster, sushi, sashimi, chicken, pork and veal, as well as Asian cuisine.