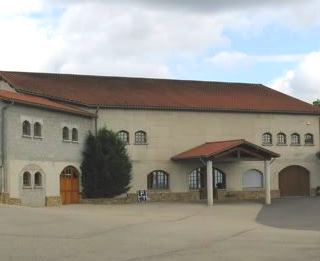 Learn everything about Domaine Jamet Cote Rotie with wine tasting notes, wine, and food pairing tips, best vintages, a history of the property, and information on the vineyards and winemaking. If you want to read about other important wineries and wine makers from the Rhone valley: Links to all Rhone Valley Wine Producer Profiles

Domaine Jamet Cote Rotie was founded in 1950 by Joseph Jamet with .35 hectares of vines in the Northern Rhone Valley. At first, the property sold its entire crop to negociants. They began to bottle and sell their own wine by 1976.

Today, Jamet is managed by Jean-Paul Jamet and Corinne Jamet along with their son Loic Jamet. Jean-Paul Jamet took over producing Domaine Jamet from his father in 1991. At the time, Jamet consisted of only 4 hectares of vines, which explains why those early vintages are so difficult to find today.

The brothers more than doubled the size of their holdings since they began managing the property. The Domaine of Jamet is located in Le Vallin, not far from the peak of the plateau, just behind Ampuis. In 2001, Jamet completed a renovation and modernization of the cellars. In 2015, Domaine Jamet added a new wine to their lineup when they produced their first vintage of Condrieu, Vernillon, which is aged almost entirely in amphora.

Domaine Jamet produces 4 different Cote Rotie wines from 8.5 hectares of vines that are distributed over 25 parcels in the Cote Rotie appellation. Those vines are placed in as many as 17 different lieux-dits.

The family owns more land on the Cote Brune, with about 25% of their vines planted in Cote Blonde. On the Cote Brune, their largest plantings are in the Chavaroche and le Truchet lieu-dits.

On the Cote Blonde, their largest plantings are in the Lancement vineyard. Their vines range from on average, 25 to 50 years of age. They have old vines, some of which were planted in the early 1940s.

The essence and character of Domaine Jamet Cote Rotie are a direct result of the blending of the wine that comes from the distribution of the parcels and their unique array of terroirs and steep, rocky, soils.

Domaine Jamet is well-situated on the plateau of Le Vallin. Perhaps their best vines are planted on the Cote Brune in the Les Moutonnes, Rochains, Fongeant, Chavaroche, and La Landonne vineyards in steep, terraced, hillside vineyards with soils of granite, rocks, schist, iron, clay, limestone, and sand soils.

Their vineyards are planted to almost 100% Syrah. Their oldest vines are more than 60 years of age. On the Cote Blonde, they have parcels planted in Lancement and Leyat.

Domaine Jamet Cote Rotie, the standard Cuvee; this wine comes from a myriad of parcels which varies from vintage to vintage. In fact, the grapes come from as many as 20 parcels located in a diverse array of terroirs using fruit from various vineyards including Cote Blonde, Cote Rodin, Cote Rozier, Cote Rodin, Chavaroche, Bonnivieres, Fongeant, Gerine, Landonne, Lesardes, Leyat, Moutonnes, Rochins, Plomb, Tartaras, and Truchet. It is the blending of all the parcels that creates the true magic of Domaine Jamet.

Jamet is a traditional Cote Rotie that retains a large portion of stems. This is because the vast majority of their fruit is whole cluster fermented during the vinification process.

The percentage of stems used varies, depending on the vintage. But most of the time, the entire crop is vinified with all of the stems attached. On average. Vinification takes place in stainless steel vats. The destemmed grapes get cap punching, while the whole bunch fruit is pumped over.

Jamet Cote Rotie is aged in 15% new, demi-muids with the remaining wine aged in oak barrels and large oak casks ranging from 3 to 10 years of age for close to 22 months before bottling.

The grapes are completely whole bunch fermented. The wine is aged in varying degrees of new, French oak that varies from 20% to 35% new, French oak for up to 24 months before being bottled.

Domaine Jamet Fructus Voluptas, the entry-level Cote Rotie for the Jamet family was first produced in the 2008 vintage. Produced from 10% Syrah, the vines, which were planted mostly in 2000, or a few years earlier, are placed in schist soils. The wine is aged in used, French oak casks for an average of 16 months before bottling.

The grapes are completely whole bunch fermented. The wine then ages for up to 16 months in used, oak barrels. The production is quite small, as it is close to only 300 cases, more or less per year. 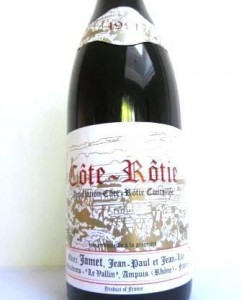 Domaine Jamet Cote Rotie in character is a traditional, beefy, animalistic, masculine, structured, peppery, and powerful style of Cote Rotie that ages well and develops complexity with time. The Cote Brune is a less interesting wine, without the same level of complexity or charm.

In 1996, 1997, and 2000, Domaine Jamet produced a wine specifically for the local, French Market, Jamet Cuvee Elegance. That wine is no longer in production.

In 2013, Domaine Jamet announced a major change for the Domaine. The Jamet family announced the brothers were going their own separate ways in Cote Rotie. Jean-Luc Jamet created his own new, Domaine using grapes from the Jamet family-owned vines planted on the Lancement lieu-dit.

In addition to their Cote Rotie, Domaine Jamet also produces a Condrieu, as well as 2 red Cotes du Rhone wines, 2 red IGP wines, Cotes du Rhone Blanc, and a Vin de France that is made from 100% Viognier.

Domaine Jamet, when young, should be decanted at least 1-3 hours, give or take, allowing the wines to soften and open their perfume. Older vintages might need very little decanting, just enough to remove the sediment.

Domaine Jamet is usually better with 10-12 years of cellaring and should be at its best between 10-25 years of age.