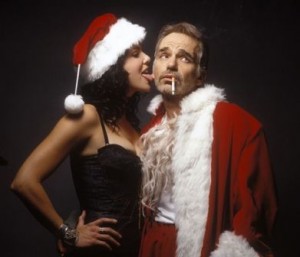 Is this the real Santa Claus? If not, it must be scandal!

Numerous Internet web sites and chat boards have been filled with posters discussing potentially real ethical violations. This is a good thing. However, just as many recent articles and postings have been centered around issues that try creating ethical issues when there isn’t one. Some of the postings and topics are about as scandalous as discovering Santa Claus is not real.

This morning I read an article called “Wine Advocate in Sonoma, no Scandal so far”. The title was dead wrong. The true scandal is the article, because there is no scandal! The article states, “I pursued a purported scandal. A Sonoma County reader told me that he was being asked to pay the Sonoma County Vintners Association to have his wine tasted by the Wine Advocate”.

How is this a scandal? Trade groups exist to make money. They perform a service. They charge for their services like every business. They are in it to make a profit. Profit is the purpose of owning and operating a business. Wineries, like any business are not forced to join a promotional group. They join and pay fees to promotional organizations because they perceive a value in having a membership in that organization.

In an Email questioning Galloni’s and The Wine Advocate’s official position on the matter, Antonio Galloni responded with: “All of these associations have strict instructions that membership in their organization is not a requirement for me to taste a given producer’s wines. Before a tasting I receive a list of the proposed wines and I chose what I will taste, independent of which wineries are and aren’t part of the association that is organizing that tasting.”

That comment sparked intense debate. There are posters that find the quoted statement ambiguous. They feel Antonio is saying that the tastings are NOT meant to exclude non-member wines. I do not read his comments the same way. When I read it, he’s saying that just because a winery is a member of the group, he is not required to taste the wine. His point is not that non members be allowed to show their wine.  differences in opinions are what makes horse races while awarding  more things to talk and debate on the Internet, or over wine shared with friends.

Do the people seeking a new, supposedly Robert Parker scandal really think  The Wine Advocate and Antonio Galloni or other writers can visit every single property one at a time? That’s not the way it works. Without trade tastings, hundreds, if not thousands of wines are never going to be tasted, rated and receive the press they need to help sell their wine. Thinking that busy critics are going to be able to visit every property they write about is a little like believing Santa Claus is real and that he has the time to visit every house on Christmas eve.

If this is a scandal, what about the round of Family Winemakers tasting’s of California wine producers that is set take place early next year? Only members can show their wines. Has anyone stopped to think about The Napa Valley Vintners Association, another members only group? What about the upcoming round of UGC, (Union of Grand Cru Bordeaux), tastings for the 2009 Bordeaux vintage? Only members of the UGC are allowed to show their wine. Members pay dues. Everyone is not allowed to join the group. The UGC hosts tastings for Robert Parker and every important journalist. The UGC exists to help promote the wines made by members of the group. Those are only a few examples of wine industry trade groups.  There are trade groups for every segment of the wine industry that promote regions, appellations and brands. These trade groups provide a valuable service that is a great help to all wine critics and consumers by putting together tastings. If these groups did not exist, numerous wines would not get the exposure from being tasted and reviewed.

There are important issues dealing with ethics that matter and deserve to be looked into. For example, being told you were guaranteed to receive a written review or a high score if you paid a fee. Those are clear, specific, examples of ethical violations. Being invited to join a promotional trade organization that offers equal treatment to every member of the group is not a problem. It is an open and honest business practice that benefits the winery, consumer and journalist.