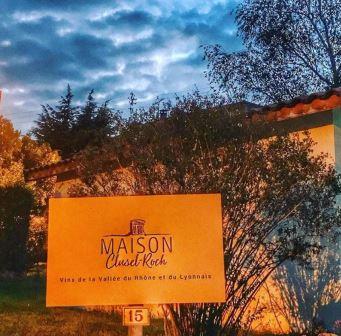 Learn everything about Clusel Roch, Cote Rotie with wine tasting notes, wine and food pairing tips, best vintages, a history of the property, information on the vineyards and winemaking. If you want to read about other important wineries and wine makers from the Rhone valley: Links to all Rhone Valley Wine Producer Profiles

The birth of what we know as Clusel Roch dates back to the mid 1930’s when Baptiste Clusel first began to plant a small parcel of vines in the Cote Rote appellation. However, the actual founding of the domaine took place in 1969.

That is the year when Rene Clusel took control of 1 hectare of vines. Those vines included a small parcel in Les Grandes Places lieu-dit. The oldest vines were planted in the late 1930’s by the father of Rene Clusel, Baptiste Clusel. Clusel Roch became one of the first growers in the region to bottle their own wine, which took place for the first time in 1969.

To allow them to produce more wine and actually make money with a full time career in the wine business, they also entered into leasing agreements with other vineyard owners to increase production. They began a program of massale selection in 1991.

Today, they have close to 4 hectares of vines in the northern Rhone. Their largest holdings are in the La Vialliere vineyard. Those vines range in age from 30 to 50 years of age.

Starting with the difficult 2002 vintage, Clusel Roch began to practice biodynamic farming techniques in their Northern Rhone Valley vineyards. Their most prized wine comes from a small .7 hectare plot of old Syrah vines on Grandes Places.

These old vines were planted in 1935 by the grandfather of Gilbert, Baptiste Clusel. The domaine is a true family affair as their young son, Guillaume Clusel has recently joined the estate. 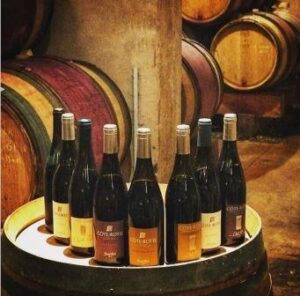 Clusel Roch owns 5.5 hectares of vines in Cote Rotie and 1/2 hectare of vines in Condrieu. They have a terroir of steep hillside vineyards on the Cote Brune in the in the lieux-dits of Vialliere, LEs Grandes Places, Verenay and Champon.

The terroir is schist and mica soils. Planted to 96% Syrah and 4% Viognier, they have a mix of old and young vines. Since the 2002 vintage, Clusel Roch has been using only biodynamic farming techniques in their vineyards. They were have been certified by Ecocert since 2005.

Domaine Clusel Roch produces a Condrieu and 3 Cote Rotie wines. To produce the wine, following a partial destemming of approximately 35% of the grapes takes place.

The wines of Clusel Roch are vinified in a combination of concrete tanks and steel vats. The wines are aged in 20% new, French oak barrels for up to 24 months before bottling.

Clusel Roch Cote Rotie Les Schistes comes from about 4 hectares of vines on the lower Cote Brune slopes. The blend is about 4% Viognier with 96% Syrah in the blend. However, that can vary a bit. On average, 50% of the grapes are whole cluster fermented.

Les Schistes spends close to 2 years in oak, of which 20% are new. The wine is made from estate owned fruit and purchased grapes. While the estate owned vines are always organic, that is not always the case with purchased fruit.

The remaining barrels range from one to five years of age. The last vintage for this wine sold under the original Classique moniker was 2015. In 2015, the wine took on a newly designed label and was renamed Les Schistes. The production is generous as close to 1,500 cases are produced each year.

Clusel Roch Les Grandes Places is their smallest holding, with about 1 hectare of vines placed in the middle to the top of slopes. The wine is made from 100% Syrah planted that is planted in a terroir of mica, schist and iron soils.

The wine is aged in 35% new, French oak barrels for close to 18 months. Les Grandes Places is a small production wine. Less than 250 cases are produced in each vintage of this stunner. It’s a beautiful style of Cote Rotie.

Clusel Roch La Vialliere made its debut with the 2011 vintage from about 1.5 hectares of vines. The vines as you might guess are planted in La Vialliere, which is located just a bit lower on the slopes than their holdings on La Grandes Places.

The vines are on average 25 years of age. The wine is aged in 25% new, French oak barrels for up to 24 months before bottling. Not much of this Cuvee is produced as only 250-300 cases are offered in a vintage. The remaining wine is added to Les Schistes.

Clusel Roch La Petite Feuille was their entry level Cote Rotie. La Petite Feuille is produced from the estates youngest vines that range in age from 4 to 10 years of age. The wine is no longer in production. The grapes are now used in Les Schistes.

Clusel Roch, when young, should be decanted at least 1-2 hours, give or take, allowing the wines to soften and open their perfume. Older vintages might need very little decanting, just enough to remove the sediment.

Clusel Roch is usually better with 7-9 years of cellaring and should be at its best between 8-18 years of age, depending on the wine and the vintage.

Clusel Roch also produces wine in the Coteaux-du-lyonnais appellation. At the end of the day, not much wine is produced here. On average, slightly more than 1,250 cases of wine are produced each year at Domaine Clusel Roch.