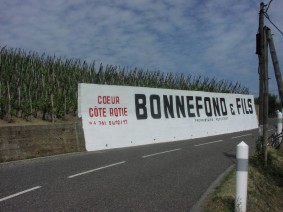 Learn everything about Bonnefond, Cote Rotie with wine tasting notes, wine and food pairing tips, best vintages, a history of the property and information on the vineyards and winemaking. If you want to read about other important wineries and wine makers from the Rhone valley, Links to all Rhone Valley Wine Producer Profiles

Bonnefond is a family owned Cote Rotie vineyard. The estate is relatively new in the Northern Rhone Valley. It was started in 1955 with the purchase of one hectare of vines. The estate began to expand thanks to purchases in the early 1980’s by Charles Bonnefond.

Bonnefond harvests late, to obtain maximum ripeness. The entire crop is destemmed. Bonnefond can use between 8% to 10% Viognier, blended with the Syrah for their top wines. Their terroir is mostly schist, mica and granite soils. The vines average roughly 30 years of age.

For Les Rochains and Cote Rozier, the wines are aged in as much as 90% new, French oak barrels, with the remaining 10% of the harvest aged in new, American oak barrels for between 18 to 24 months. The aging program gives the wine a modern style.

The wine displays rich textures, good freshness and lush textures, Of the three wines, Les Rochains is the finest. Cote Rotie is always expensive, due to its high quality and low production. However Bonnefond still remains well priced for a wine at this level of quality.

Bonnefond Colline de Couzou was first produced in 2009. Made from 100% Syrah, that is completely destemmed, the wine is aged in 10% new, French oak barrels for 18 months before bottling. This wine replaced the classique Cote Rotie. The average annual production is close to 1,000 cases of wine per vintage.

Bonnefond Cote Rozier – The wine made its debut with the 2000 vintage. Produced from 100% Syrah on the Cote Brune, next to La Landonne, the wine is aged in an average of 25% new, 400 liter barrels for about 18 months before bottling. The production of this cuvee is quite small, as it runs about 125 cases per year.

Bonnefond Les Rochains comes from 100% old vine Syrah from the Les Rochains vineyard, that is well placed, right next to La Landonne. The vines as we mentioned are old, most were planted back in 1955.

The grapes are completely destemmed. The wine is aged in 25% new, 400 liter barrels for up to 20 months before bottling. This can be difficult to find as the production is limited to an average of 300 cases per vintage. Les Rochains remains my favorite Cote Rotie wine from Patrick Bonnefond and Christophe Bonnefond.

They also produce 2 wines in Condrieu, a traditional cuvee and Cote Chatillon as well as a 100% Viognier Vin de Pays, and a 100% Syrah, Vin de Pays, from vines close to Mornas.

Bonnefond Cote Rotie Classique is no longer in production, as it was replaced in 2009, by Bonnefond Colline de Couzou. Bonnefond also produces a small amount of Vin de Pays.

Bonnefond, when young, should be decanted at least 1-3 hours, give or take, allowing the wines to soften and open their perfume. Older vintages might need very little decanting, just enough to remove the sediment.

Bonnefond is usually better with 7-8 years of cellaring and should be at its best between 10-20 years of age.

Condrieu, the white wine of Bonnefond is best served with a myriad of different seafood dishes, shellfish, crab, lobster, sushi, sashimi, chicken, pork and veal, as well as Asian cuisine.