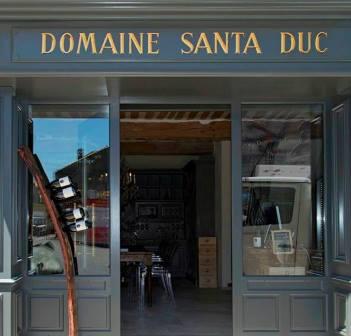 Learn everything about Domaine Santa Duc Chateauneuf du Pape with wine tasting notes, wine and food pairing tips, best vintages, a history of the property and information on the vintage and winemaking. If you want to read about other important wineries and wine makers from the Rhone valley: Links to all Rhone Valley Wine Producer Profiles

Even though Domaine Santa Duc has a long history for being one of the top producers in the Gigondas appellation, as well as being one of the biggest negociants in the Southern Rhone Valley, they are fairly new to Chateauneuf du Pape.

The creation of Santa Duc dates back to 1874, when the fledgling company was founded.The seemingly odd name was not what the company was originally called. It was “Canta Duc,” which can be loosely translated to mean a singing owl.

In time, the name morphed into Santa Duc. Santa Duc has remained a family run company. The company headquarters is located in Dentelles de Montmirail. Yves Gras, who was been in charge of Santa Duc since 1985 and he will be followed by the by his children as well.

Domaine Santa Duc began purchasing vineyard land in the Chateauneuf du Pape appellation back in 2009, when they found a small, 1.23 hectare of vines. Since then, they have increased their holdings with further purchases in the La Font du Pape vineyard and in the top terroirs of the La Crau lieu-dit.

Domaine Santa Duc La Crau Ouest is made from 100%, old vine Grenache. The vines are at least 80 years of age and are planted in sand and clay terroir found in the la Crau Ouest vineyard. The wine is aged in Terracotta jars for 18 months before bottling. The production is quite small, as only 200 cases are produced here each vintage.

Domaine Santa Duc Les Saintes Vierges is made from a blend of 90% Grenache, 9% Mourvedre and 1% Counoise. The terroir is pure sandy soil in the les Saintes Vierges lieu-dit. The wine is aged in foudres for 18 months.

Domaine Santa Duc Habemus Papam – The name of the wine can be translated into “We Have a Pope.” This was done as an hommage to Pope Jean XXII, who was a native from Cahors, in the Northern Rhone Valley. It was Pope Jean XXII who became the first Pope to reside in Avignon.

The wine is produced blending 64% Grenache, 25% Syrah, 10% Mourvedre and 1% Counoise. The terroir is sand, rock and stone soils in the la Crau, la Font du Pape, le Pied de Baud, Pradel and les Saintes Vierges lieux-dits. The grapes are whole bunch fermented. The wine is aged in foudres for 18 months before bottling.

Domaine Santa Duc Pied de Baud comes from vines planted in the Le Pied de Baud vineyard. The wine is made with 100% Grenache. The grapes are not destemmed. The wine is aged vinified in cement tanks. The aging takes place first in demi-muids for 12 months and then for 6 months in cement vats. Production is limited as only 250 cases are produced each vintage.

Domaine Santa Duc can be enjoyed on the young side. But the wine is better with some bottle age. Young vintages can be decanted for 1-2 hours allowing the wine to soften and open its perfume. Older vintages might need very little decanting, just enough to remove the sediment.

Domaine Santa Duc is usually better with 3-5 years of bottle age. Of course that can vary slightly, depending on the vintage. In the best vintages the wine should be consumed within 5-15 years after the vintage.