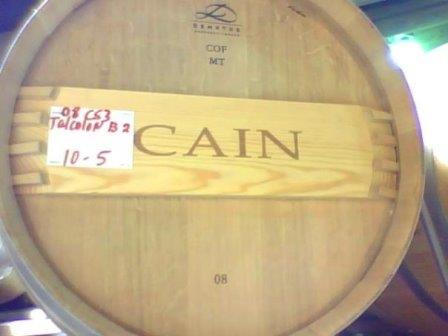 Cain Vineyards is a child of the 1980’s. The winery was founded in 1980 when Jerry Cain and Joyce Cain made a purchase of 550 acres on Spring Mountain. Much of the land in those days was being used as pasture land for sheep. In fact, the land purchased from the McCormick Ranch had been used for ranching since the 1870’s. Located in prime soils, with an amazing vista, they quickly began cultivating their vineyards with all 5 of the main Bordeaux grape varieties, Cabernet Sauvignon, Merlot, Cabernet Franc, Malbec and Petit Verdot. It’s easy to see where Cain Vineyards found the inspiration for its flagship wine, Cain Five.

It took 2 years before Cain Vineyard finished constructing their winery and cellars in 1982, which fortunately was just in time for their first harvest. However, with vines that young, it took a few years before they were ready to produce and release their wine for sale. Their first wine, Cain Five made its debut with the 1985 vintage.

The Cain Five Vineyards are located high up on Spring Mountain, with elevations that range from 1,400 feet to 2,100 feet. This affords not only amazing views, but due to variances in temperatures, their parcels ripen at different times, making it tricky in some vintages to achieve uniform quality. Much of the vineyards were replanted in 1995. While Cain Vineyards maintains plantings of all five Bordeaux grape varietals, Cabernet Sauvignon is king here, with more than half of their plantings devoted to Cabernet. At one point, they produced a Sauvignon Blanc, but that wine is no longer being made.

Cain Five Vineyards produces 3 red wines today. In total, the estate makes close to 22,000 to 25,000 cases of wine per vintage.

Cain Five is their flagship wine. The wine is made from a blend of all 5 of the major Bordeaux grape varieties, Cabernet Sauvignon, Merlot, Cabernet Franc, Petit Verdot and Malbec.

Cain Cuvee is made from a blend of two vintages.

Cain Vineyards are best served at 15.5 degrees Celsius, 60 degrees Fahrenheit. The cool, almost cellar temperature gives the wine more freshness and lift. Young vintages of their red wine can be decanted for 1-3 hours, depending on the character of the vintage. This allows the wine to soften and open its perfume. Older vintages might need very little decanting, just enough to remove the sediment.