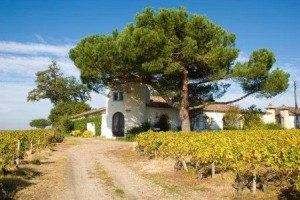 Learn everything about Chateau Lamothe Despujols Sauternes, Deuxiemes Crus with wine tasting notes, wine-food pairings tips, a history of the property, information on the vineyards, and winemaking. If you want to read about other important, Bordeaux Chateaux: Links to all Bordeaux Wine Producer Profiles

Lamothe Despujols is one of the older wine-producing estates in the Sauternes appellation. In fact, it can be dated back several centuries. The oldest buildings on the property were constructed all the way back in the 16th century.

The Lamothe family founded the chateau, which is where the first part of the name comes from. Centuries later, in 1961, the Despujols family took over the property. Following the previous custom in Bordeaux when owners added their name to the estate, the chateau from that point forward became known as Chateau Lamothe Despujols.

The 7.48-hectare vineyard of Chateau Lamothe Despujols in Sauternes is planted to 85% Semillon, 10% Sauvignon Blanc and 5% Muscadelle. The terroir is a mix of limestone, sand, gravel, and clay soils, on a plateau, with southwest exposures. The vines are on average 40 years of age. But the vineyards of Chateau Lamothe Despujols also have old vines. Some of their oldest vines are more than 70 years of age.

To produce the wine of Chateau Lamothe Despujols, after the grapes are pneumatically pressed, vinification takes place in vat. The wine is aged in a combination of tank and 25% new, French oak barrels.

There is a second wine, Les Tourelles de Lamothe. Production of the Sauternes wine from Chateau Lamothe Despujols is on average 1,000 cases of Sauternes wine per year.

Chateau Lamothe Despujols is best served at 14 degrees Celsius, 57 degrees Fahrenheit. The cool, almost cellar temperature gives the wine more freshness and lift. The wine will naturally warm in the glass, while it develops more aromatic complexities and fleshes out.