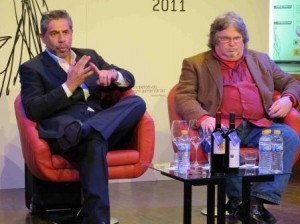 It’s easy to lose track of the numerous official investigations taking place in what many are calling “Campogate”. This is a story that will not be fading away. It’s got intrigue, suspense, bloggers, reporters, gossip hounds, Robert Parker and money. The only thing missing is the sex. There are now almost as many official investigations as a real government scandal.

The Masters of Wine is a well regarded and prestigious organization that since it’s inception in 1955, has only 299 current members that have earned the coveted MW title. According to their official statement, they received a formal complaint based on the alleged misconduct of Pancho Campo. Sources commented that investigations of members is an infrequent occurrence. Only a handful have been conducted since the Masters of Wine program started in 1955.

For the record, we are still waiting on a response to a series of questions sent to Pancho Campo.

A series of unflattering articles have filled the wine lovers Internet world. The most personal attack was written by Antonio Casado, a well-known wine journalist from Spain wrote a blistering article on Jay Miller that has been widely read all over the Internet and Spanish newspapers. The article was critical about Jay Miller as a writer and took the interesting and often unfair slant of criticizing him as a person as well. Jay Miller finally responded. As expected, his version of the events contradicts Casado.

Miller “His petty complaining starts beginning with the “rickety” train. It was the AMTRAK Northeast line, the best we have, although decidedly inferior to Spain’s high speed trains. What this has to do with me I have no idea. Maybe it put him in a negative mood, who can say?… We did not drink excessively (I was driving) but Casado is a petite fellow with an apparently low capacity. From this lunch he concludes that I am “just a mediocre taster”. How he reaches this conclusion from a single lunch and one wine defies logic”.

Casado “I flew to Washington, from where I went on a rickety train to Baltimore. Jay, in an extraordinary gesture of humility, came to pick me up at the station. I could see, our character was a good guy, friendly and pleasant enough, a big eater and drinker, and just a mediocre taster”.

Miller “His next error is stating that I had not previously set foot in Spain. As a retailer (part-owner of Bin 604 Wine Sellers in Baltimore) I had traveled extensively throughout Spain with Jorge Ordonez and also gone on his “Death March” with some of his customers”.

Casado “The most revealing of his confessable admissions was, in addition to confirming that he had never set foot in Spain”.

Miller “He then states that Parker selected me because we were members of a wine tasting group and because he had lost confidence in this “former tasting team”. The wine club was a casual affair that had nothing to do with The Wine Advocate and the “team” consisted of Pierre Rovani who left to pursue his own ventures. Robert Parker chose me because of my extensive retail experience, a brief experience with a distributor, but most importantly, 16 years as his (paid) tasting assistant where we tasted side-by-side on nearly 1000 occasions in his office, Bordeaux, the Rhone Valley, Burgundy, and Napa/Sonoma in California. In short, he knew my palate and trusted my judgment in wine evaluation. I doubt that Parker could have found many people with a better resume than mine”.

Casado “He and Robert Parker himself had belonged for several decades to a local wine tasting club (called something like “Oenarchs” or “Monarchs of Wine”), and Parker’s loss of confidence in his former tasting team (also with them I remember there was controversy) led him to prefer someone close and highly reliable to someone with a better wine-related résumé”.

Miller “He claims that I was melancholic (totally wrong – that is simply not me) and that I showed photos of Parker, me, and my late wife in France. This is an impossibility because I never traveled to France professionally with my wife. She would not have been interested”.

Casado “He showed a more then interesting cellar, full of fine wines but also lots of photos of him and Parker, mostly in France, and accompanied by Jay’s wife, who had died just three years earlier”.

Miller “Furthermore, Casado has no baseline against which to assess my mood. Having been a mental health professional for 25 years (1973 – 1998) with a Ph.D. in Psychology, I think I’m a bit better trained in assessing a person’s mental health status. I was not depressed then (I was long over my wife’s death in 2004) and have not been since. It’s just pure sleaziness on Casado’s part to speculate about these personal matters”.

Casado “From the time we crossed the threshold of his house, all the luminosity and nimbleness in his conversation seemed to turn to shadows, darkness and a high degree of melancholy whose origin was revealed to me in the next few minutes when, before sitting for the interview… It was remarkable how the critic seemed to have vanished and the role of relatively recent widower had monopolized his immense self”.

Miller “The next thing Casado is wrong about is my work space. He saw a room with many bottles (the vast majority unsolicited samples which I mostly gave away) but almost none of my tasting was done in my house but rather at local area restaurants where I worked with trained sommeliers who know how to present the wines to me in a proper condition”.

Casado ” Back upstairs he showed me his work space, a large room with many windows in the center of which was a large, solid wooden table surrounded by a sea of bottles, mostly Chilean wines whose tasting he told me he would begin the next day. There were several things that struck me at once: The number of bottles and random arrangement on the ground meant that the question of optimal tasting temperature was not among Jay’s priorities”.

Miller “The next bizarre speculation is about why I gave 100-points to five 2004 wines (1 Toro, 1 Ribera del Duero, 2 Riojas, and 1 Priorat). I gave them because what was in the bottle was that good. To me, 2004 ranks as one of Spain’s greatest vintages. I have since retasted all of those wines (usually in a vertical context in which the 2004s stand out) and they only confirm the accuracy of my scores”.

Casado “The most notable revelation was that his hundred points to to each of the five Spanish wines were those of a man who found himself between a rock and a hard place. His boss, Robert Parker had given 99 points in the previous vintage, 2003, to the same five wines and given the evidence that the subsequent 2004 vintage was noticeable better, Miller had no choice but to push (the same wines’s scores) to the highest level”.

Miller “By the way, I have since added the 2004 Remirez de Ganuza Gran Reserva to the 100-point level. I called it as I saw it and with no agenda in mind. I hope this will begin to set the record straight”.

The quotes from Casado were first published in Elmundovino in Spanish.