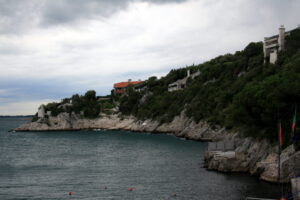 Vitovska is an appealing wine. For local producers, its flavours are about pears and sage, but this is not all. Simple wines have bright floral aromas and a creamy taste of peaches, apricots and exotic fruit of medium concentration, with good balance and often a touch of minerality. Best examples offer complexity, with an array of fruit flavours, including white and yellow stone fruit and citruses, as well as signature mineral notes and light spice. There is a remarkable back palate action, full, intense and long that gives Vitovska an extra notch. If one has to draw parallels with other white varieties, Galician Albariño is perhaps the closest. Both are seaside grapes with a rounded creamy character, mid to full body, nice equilibrium and a light salty note. Both fare better without oak, or in previously used barrels which do not impart strong oaky flavours. Some Carso producers experiment with long skin macerations (this is Friuli where the Gravner school of vinification remains strong), but these wines can be hit and miss. Like Albariño, Vitovska shows its best 3-4 years on from the vintage date, later acquiring tertiary aromas of camphor and petrol.

Italy is a treasure trove when it comes to indigenous varieties. Nebbiolo in Piedmont and Sangiovese in Tuscany have received international acclaim. Recognition of others may be limited to national or even regional boundaries, but it doesn’t mean that they should be overlooked by wine lovers who live outside these areas. Many local Italian grapes have their own personalities and can express a sense of place in a splendid manner, also proving the case that small can indeed be beautiful.
.
Vitovska (pronounced VEE-tov-ska) from Carso is one such example. If you have never heard either of the grape or of the wine area before, you may be forgiven, as Vitovska remains an obscure phenomenon even inside Italy. Forty hectares divided in tiny plots between thirty or so producers – what’s the fuss?
.
One starts to appreciate the variety – and more so the work of local viticoltori – after a visit, even brief, to its genius loci. Carso DOC is located in a narrow stretch of land hugging the gulf of Trieste, which continues further north-west to stop at the natural barrier of the rivers Isonzo and Vipacco. This is the eastern extremity of Italy, bordering Slovenia, with an inimitable mix of Italian, Austro-Hungarian and Slavic cultures. Road signs are in two languages, and the locals speak a curious dialect of Italian and Slovenian, incomprehensible to other Italians, but remotely familiar to people of Slavic origin.
.

As it happens, the Vitovska name also has Slovenian routes. In the past the coast of the Gulf of Trieste was protected by chevaliers, or vitezi in Slovenian. In exchange for his services, a vitez received a measure of wine. He was normally offered a white that was fermented first – thus the wine and subsequently the grape got to be known as Vitovska. Sometimes, it is also referred to as Vitovska Garganja.
.
A vine has to suffer if it is to produce a good wine, goes a winemaking adage. Vitovska, along with other varieties in Carso, lives a life of hardship, impossible to imagine in this corner of southern Europe unless you see it for yourself. Vineyards are often planted within a stone’s throw of the Adriatic, but the ground is composed of hard limestone rock, deceptively covered by a few centimetres of fertile humus. “Poca terra, tanta pietra”, sums up winemaker Benjamin Zidarich. Working the soil in Carso means manual labour only. Summers are hot, but winters can be freezing, reaching sub-zero temperatures. The northern bora is a prevailing wind that sweeps away everything in its path when it blows with a speed of up to 200 kilometres per hour. The bora also explains another possible origin of the Vitovska name. Vines have extremely robust tendrils, or viticci in Italian, with which they cling to stakes to withstand the powerful wind.

Only small farmers are able to sustain viticulture in Carso. There are no big estates, nor large individual vineyards. Some wineries don’t even bottle their wine. Instead, they prefer to sell it in situ through osmize, wine taverns with a concept of serving new wine and cold snacks, like Austrian heurigen. Edi Kante and Benjamin Zidarich are the driving forces of Carso. Both make exemplary wines, including Vitovska. Zidarich also produces outstanding white Prulke where Vitovska is blended with Malvasia and Sauvignon. Both producers have stunning underground cellars, carved in stone, where one can also observe how the natural Karst processes dissolve the limestone bedrock. Karst formations brought fame to the area in geological circles and also among tourists, as Carso is known for the world’s largest tourist cave, Grotta Gigante.

.
It is not, however, Grotta Gigante that drives many people to Carso in the summer. Four years ago producers launched a tasting event dedicated to Vitovska, and it appears to grow in popularity with every year. Mare & Vitovska is a walk around tasting with producers pouring wines for the guests, and restaurateurs literally cooking on the neighbouring tables. This is all set up in Castello di Duino, a pretty historic castle overlooking the sea. Vitovska producers from Slovenia are also invited. The event offers a good opportunity to taste almost all Vitovska that there is on offer, but the place does get very crowded quickly.
.